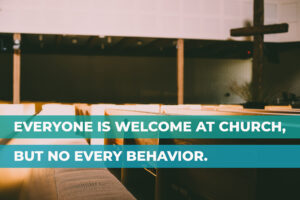 The city of Corinth in the 1st century in many ways resembles the United States of America today. The culture, society, and people had become selfish and conceited. Their city and culture had become preoccupied with sexual sin. This sin was pervasive and rampant, and it was beginning to affect the church.

At the end of 1 Corinthians 4, Paul describes the state of the church. He notes that there was no accountability for the believer’s behavior in Corinth. They were functioning with no chance they would be confronted for their behavior.

I believe Paul begins chapter 5 with the last sentence of chapter 4 on his mind. He gives them a real-life example of how they should handle public unrepentant sin. Paul points out a case of open incest in the church. Not only was this a serious sin, but it was unrepentant and public. Even in the 1st-century Roman culture, the pagans didn’t approve of this behavior. There was no grief over this sin. The church had minimized and rationalized public immorality in their midst and saw no need for discipline.

Maybe they viewed this toleration as a freedom in Christ since they were forgiven. Perhaps they rationalized their tolerance as an expression of Christian love. Whatever the case may be, they were blinded to the clear truth of God’s standards. They were not taking sin seriously and it was putting them on the brink of a church-wide spiritual catastrophe.

“When we cease to be shocked by sin we lose a strong defense against it. That was the pattern followed by the church in Corinth. She arrogantly followed her own feelings and rationalizations rather than God’s Word.” (MacArthur).

HOW SHOULD THE CHURCH ADDRESS PUBLIC SIN?

THINK OF THE CHURCH (v.1-13) – We should consider and ask “How will this sin affect the church?” If we truly love the church of Christ, we will not allow sin to weaken and destroy it from within. Inaction is unloving and inexcusable. Sin is contagious. It never exists in isolation. Paul considers the effects on the whole church by asking, “Do you not know that a little leaven leavens the whole lump?” (1 Cor. 5:6)

We must affirm a commitment to clear biblical convictions while maintaining the message of God’s love for all people.

It is important to note that God’s definition of love, as described in the Bible, differs from that of the world. The world seems to conflate love with absolute tolerance. As parents, we know that tolerance is often the most unloving thing we can do for our children. Because we love our children, we do not tolerate sin, disobedience, or harmful activity. My kids may want to eat candy all day, if I were to tolerate this, and allow it, what sort of parent would I be? What loving parent allows their children to harm or destroy themselves? Not a loving one. We ought to love people enough to not stand by and passively watch the destruction of themselves physically and spiritually.

Biblically, love and reproof our not contradictions. If we fail to reprove another who is engaged in self-destructive behavior, or any conduct that God deems as harmful, we cannot claim to be acting in love either by the offender or those affected by the offender’s actions. This means to truly love one’s neighbor we do not embrace every form of consensual behavior. When the Bible makes it clear that a particular behavior is sinful and a barrier to the fullness of life in Christ Jesus, then the church has an obligation both to protect the church from the debilitating effect of sanctioned immorality and to protect the individual for whom more is at stake than the satisfaction of their impulses. (Robert Gagnon)

Warren Wiersbe describes the church’s three-fold response to public and unrepentant sin that we see in 1 Corinthians 5.

Mourn Sin (v.2) – Not only was the Corinthian church not grieved, but they were also openly accepting sin amongst their membership. They were celebrating their death. It was sick and sad. “We are far too hospitable with our sin. When was the last time we looked our sin in the mirror and came away broken? When was the last time we felt the gravity of our sin as betrayal against a holy God? Rarely do we weep. Our hearts are callously numb. Though justified by the blood of Christ, we are still infiltrated with sin (Romans 8:13), and most of the time we appear okay with it. We need help. We need reminders.” (Jared Mulvihill)

What is the deal here? Is Paul contradicting himself? Not at all. He is noting that there are things we judge and others we don’t. We should not judge “hidden…purposes of the heart”. We must not assume sin if we suspect sin, given how biased our suspicions can be. (Bloom)

We should however judge obvious, clear, and public sin in the church. This should be done with gentleness, without condemnation or being judgmental. We should love one another enough to recognize and call sin a sin, not sweep it under the rug or rationalize it away. It needs to be identified and killed.

Remove Sin. (v. 6-13) – The leaven referred to here is sin. It may be small, but it is powerful. It “puffs up” the dough; it spreads. The sinning church member in Corinth was like a piece of yeast; he was defiling the whole loaf of bread. It was like a disease in the body. (Wiersbe). The church needs to take this seriously and remove it before it causes the death and destruction of the whole church. The clear, public sin must be purged.

EVERYONE IS WELCOME AT CHURCH, BUT NOT EVERY BEHAVIOR

Are sinners welcome at church? Absolutely. Join the club. Everyone is struggling with this sinful flesh in many ways. God has given us one another in Christ Jesus to help in our warfare against our sin.

Confession seems to be a lost discipline in the church. I think most fear anyone seeing or knowing their sin. Maybe Scripture like 1 Corinthians 5 makes that fear worse. I want to be clear, not every sin in your life should be everyone’s business. I have sin in my life, and I do not want it broadcasted to everyone. While my sin should not be thrown in the street for everyone to see, someone should know about it. You and I should have people in our lives to who we can confess. A close Christian friend. Christian family member. Married couples have built-in accountability partners. Confession is a wonderful discipline to stop us from getting to the point of letting any particular sin have a stranglehold on our life or to the point where it is being flaunted in public.

While every sinner is welcome, God’s Word makes it clear that public sinful behavior is not. We ought to take our sin seriously, and love one another enough to help fight it together.

Everyone Is Welcome at Church, But Not Every Behavior